From Shutdown to Growth About a year ago we had to shut down the weekend school and much of our
ministry because of Covid-19. Within a few months, a couple who worked
with us for almost three years also left.

We did not know how things would be when we partially started up our
ministry again in August 2020, but most of the children still came to
our weekend school even though we had closed it down for over five
months, and we had between 15-25 children until Christmas time.
This newsletter will be about growth and progress in our ministry, and about and the situation in Myanmar. Feel free to read to the end.
Remember to subscribe to our newsletter. Use the form under! (The picture above shows some of the children at our weekend-school in front of our recently purchased ministry car)
About a year ago we had to shut down the weekend school and much of our ministry because of Covid-19. Within a few months, a couple who worked with us for almost three years also left.

We did not know how things would be when we partially started up our ministry again in August 2020, but most of the children still came to our weekend school even though we had closed it down for over five months, and we had between 15-25 children until Christmas time. 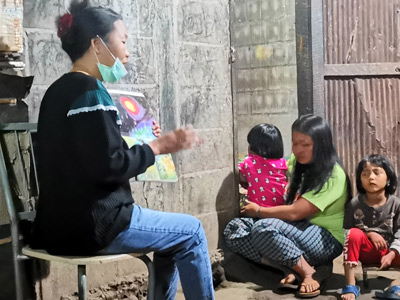 After New Year, we had to shut the ministry down again due to a new wave of Covid-19, but here in the north it was under control in early February.

In February we got in touch with several new Shan, Karen and a people group called Ba Long people, they all speak Shan and are also from Myanmar.
We were finally able to buy a ministry car, and we have received good help from the new couple who started working with us after the New Year.
During February and March, the number of children coming to our weekend school has increased from 15-25 to over 40 (if everyone comes).
We also have many people to follow up, both Christians and non-Christians, and we are constantly being asked if we can come home to people to pray for them, and we do not have time to visit them all in one week (so it takes two-three weeks to be able to visit all).

Many came to our monthly evening meetings 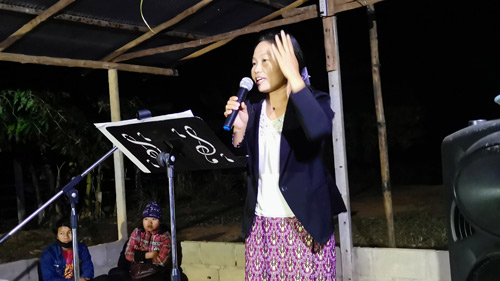 The last Sunday in February we had a evening meeting that we usually have every month (we did not have it in January because of Covid-19), and we have never had so many people come to these meetings before, I do not think since I came out here as a missionary, almost 17 years ago. (I do not count Christmas parties, because it is a special occasion once a year, and there we have had more that this.)
This was a regular evening meeting were we served food, and there were around 100 people including children that came. We prayed for over 30 people, with everything from illness to marital problems.
Most were from the village we have our ministry, but there were also people from other villages.

We are not only two married couples in the team, but we also have volunteers who comes with us when we visit Shan people (and other peoples from Myanmar), and are teaching. We even have one non Christian who volunteer to teach Thai every Tuesday, for free.
Wednesday last week we were three places and seven people who went together.
We also have a young girl who helps us some evenings and on the weekends.

We have really seen a lot of growth over the last six months, I could have told you many stories and if you read these newsletters or follow us on our ministry’s Facebook page you will have read some of them.

New Ministry Car.
For almost three years we have been praying for a ministry car. In February we finally were able to buy one.
It is a Toyota that is around 20 years old, but good for our use.
At the same time as we bought it, we have also had many new children, and we have really needed it.

Thank you to everyone who has contributed to it, and prayed with us for it! 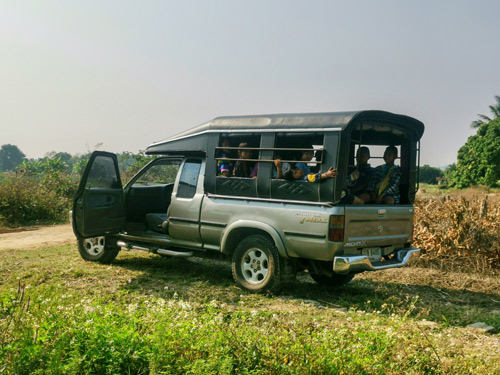 Myanmar and the Military Coup

I wrote this in Norwegian last week, but since last week the situation have even got worse and there is close to 200 people dead now, since the coup started.

I had intended to write something about the military coup in Myanmar for some time, but it has taken time because I felt it has been a bit difficult to put it into words.

We have family in Myanmar and my wife has lived most of her life there, and is from Myanmar, so this has affected us, and affects us.
February the 1st started as a normal day, but in the afternoon my wife saw something on Facebook that was disturbing. She asked me to check International News to see what was happening. When I went online and checked Norwegian news media, the headlines were: Military coup in Myanmar, and it confirmed our fears.
For the next days it was a lot of uncertainty (and it still is). At times, it was difficult to get in touch with my wife’s mother and siblings with whom she has a lot of contact with, as the telephone and the Internet were down most of the day. 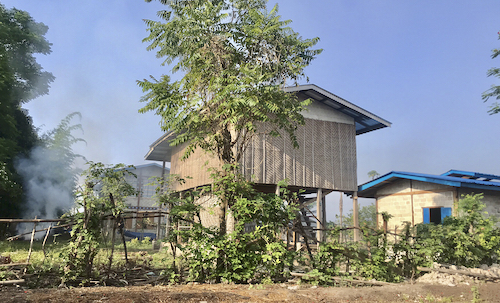 My wife grew up in the 80’s, and she still remembers that she had to live in a bamboo house far out in the jungle for the fear of military when she was little. Eventually, they moved down to a village where most of the family lives today.
However, they experienced uncertain times, and their father said he did not want to build a house or anything of great value, because they could never know if the military would claim it.
It was difficult to build a future, they did not know what would and could happen tomorrow.

Most people in Myanmar know what it means to live under a military dictatorship, and they have also acquired a taste for freedom and democracy, which is why there are so many people protesting, they would rather die than be subjected to a brutal military regime again.
What has happened in recent weeks is heartbreaking, where we see images of the military killing and mistreating peaceful protesters, with clear violations of human rights and the Geneva Commission.
One of the worst I’ve seen (and there’s a lot worse than this, because I am trying to stay away from watching the worst) was a video about how they abused innocent and defenseless health professionals, in which one of them died, just because they helped injured people who were protesting.
But what is perhaps most frustrating is to experience how the world community just are standing and watching.
They condemn it and impose some sanctions, but they can or will not do anything more.

Part of the key lies in China and neighboring countries, which have not condemned the military coup, but said it is only internal affairs.
One day my wife asked a bit angry, “Why can’t the UN or the United States intervene ?!” I said that it has a lot to do with China, which has major economic interests in Myanmar. “Then it is China that controls and rules this world!” Said my wife frustrated. Maybe she’s a bit right about that? If not the world, then much of Asia.

It has been very frustrating for me to see the indifference to the large and strong democracies countries and continents, which don’t do much, not everything is solved by condemning notes (which the military cares very little about) or boycotts.

Please remember to pray for Myanmar which is facing an uncertain time!

The one positive thing that is happening is that everyone are now gathering against the military regime. The country has been very divided due to many ethnic, religious and cultural groups and peoples, but it seems that they are more and more united, so keep praying for this to happen!

Use this link: PayPal

We also have a Thai Bank account you can transfer money too. Feel free to contact us for details.

Please feel free to write your name and e.mail address under to receive our newsletter